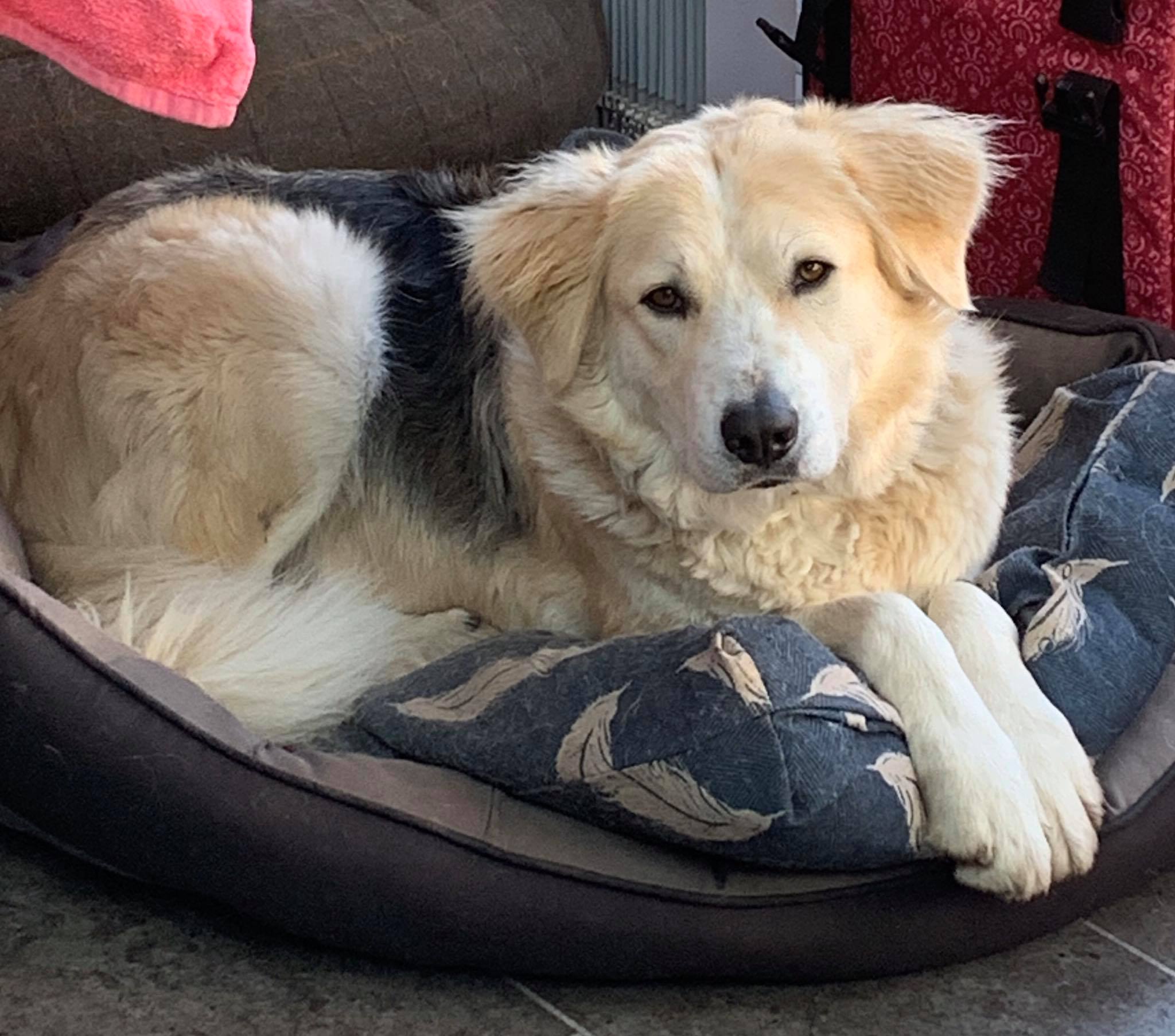 “We absolutely can’t have any more dogs!!!”

I believe we said that after our first rescue beagle ate the leather sofa….we knew it to be a fact when our small house fell victim to two more rescue beagles and their own inimitable personalities…. Ruby is number 1 beagle – she’s in charge of everything and everyone! She is way too clever for the rest of us and plays us to her own ends. Bailey should be an only child, she hates sharing and can often be found sulking in the downstairs loo and then there is Cooper who is ruled by the girls and his stomach.

So I was definitely not looking for another dog when “BAM”!!….. There he was on Facebook – the last time I felt like that was in 1986 when Tom Cruise first appeared in Top Gun! Only this time I knew this handsome fellow would be coming to live with me. There was Zeus staring into my soul with a big smile on his face – I vowed then I would see that smile, but without the bars of a cage between us.

So what now?? Break the news to my long-suffering partner who already poo picked for three dogs and five horses. “Darling ( he knew something was coming ) I’ve found a dog we have to have.! “ Crack on then…. was his reply, he really is as daft as me!! Can we go and see him??….

Now to the practicality….. on further inspection I realised he wasn’t just down the road where we could do a Sunday afternoon sensible meet and greet with the beagles…..he was in Romania!! But being a strong believer in what will be will be, I filled in the form and waited with excitement for the home check. Luckily the beagles behaved, and I must have too as we got a call from the lovely Jayne at 1 Dog At A Time Rescue!

Two hours later….! And we were proud parents to be again! It still hadn’t really sunk in and all we knew of this poor boy was he had been found collapsed, dehydrated and starving at the side of the road, and been taken in by a 1 Dog friend. 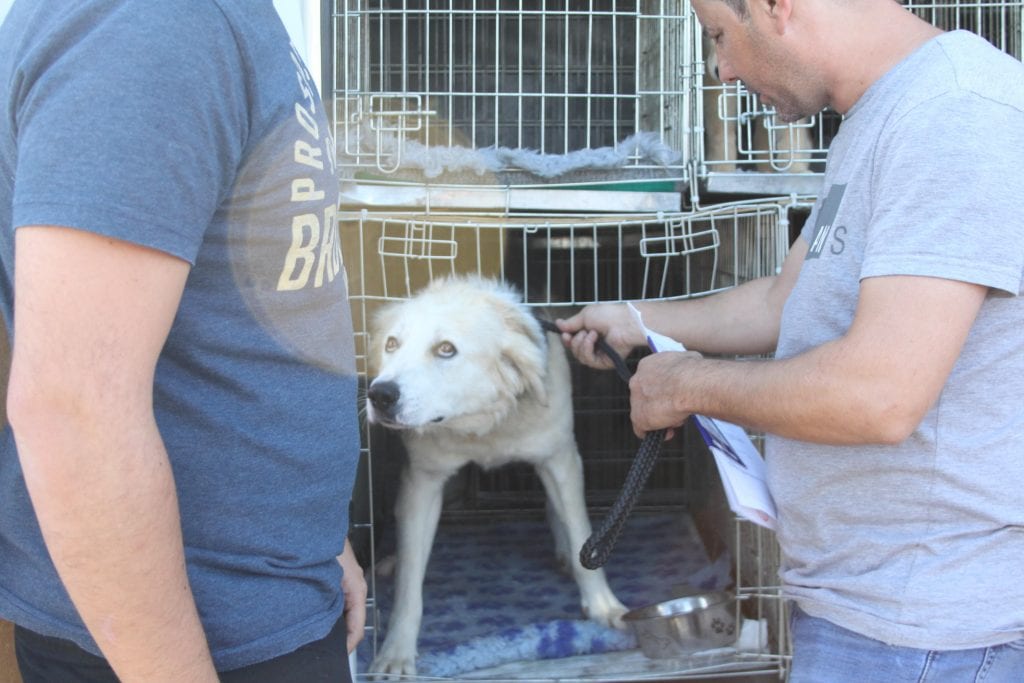 So collection day arrived, it was like going on a blind date only this time there would be no escaping out of the toilet window if he had bad breath!! We travelled from Doncaster to Sharon’s in Northamptonshire, where we were all congregating to meet the transport. It was a lovely sunny day, and all the new parents were milling around anxiously for the arrival that would change their lives. The van eventually landed, and as the back doors opened to reveal all the little faces, there was not a dry eye amongst us. 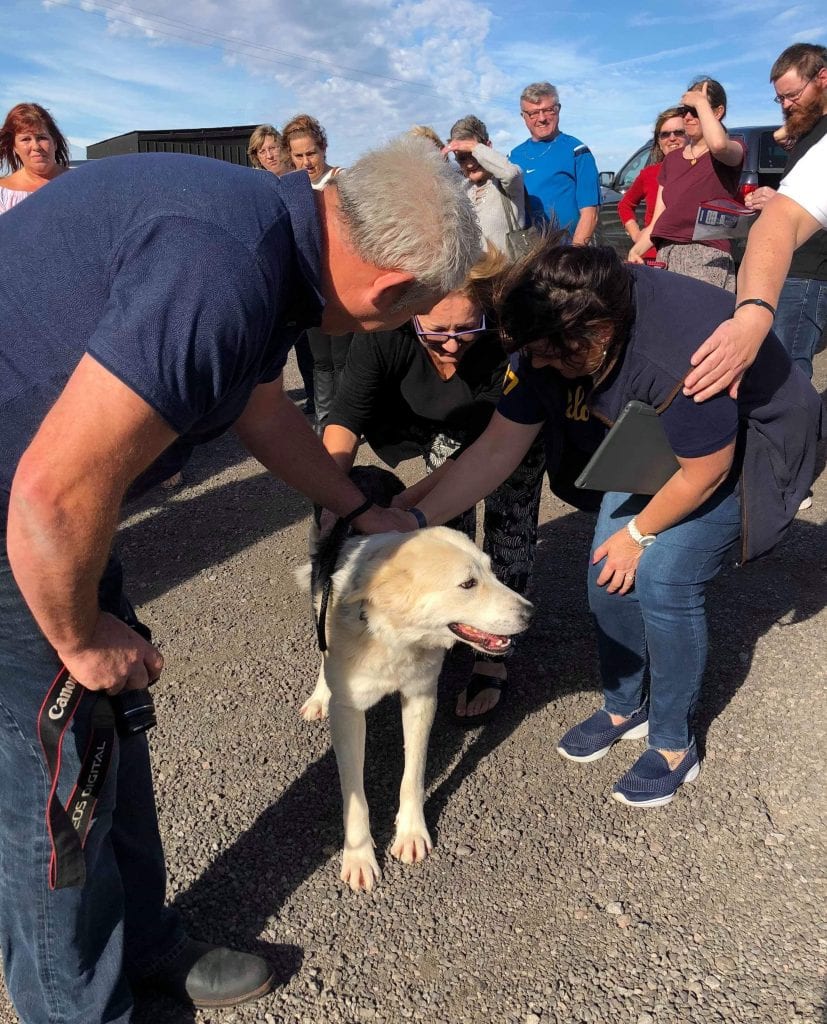 The enormity of the situation really hit when it was announced the extra-large dog needed to be taken out first….” Can Zeus’s new family step forward”…. His cage door opened and I now know where the meaning of the expression ‘ hangdog ‘ comes from! Zeus stared out at us with total apprehension…”Come on boy, it’s ok… Aunty Jayne and your new Mum and Dad are here!” The rest is a blur of emotion watching the other dogs come off the transport, each with its own expression and personality. 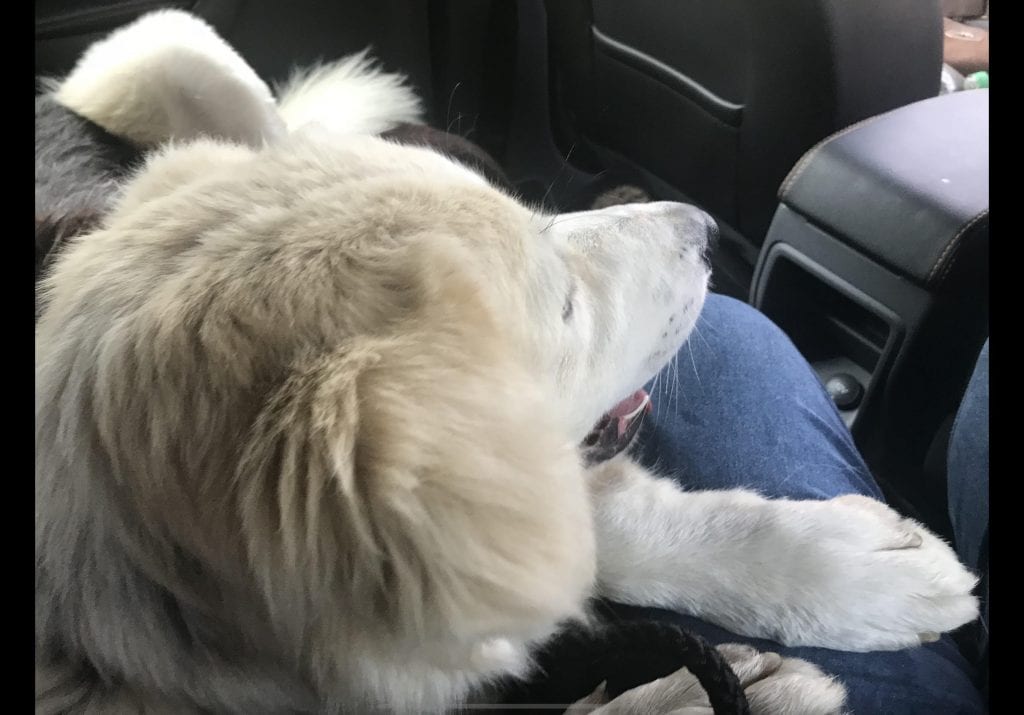 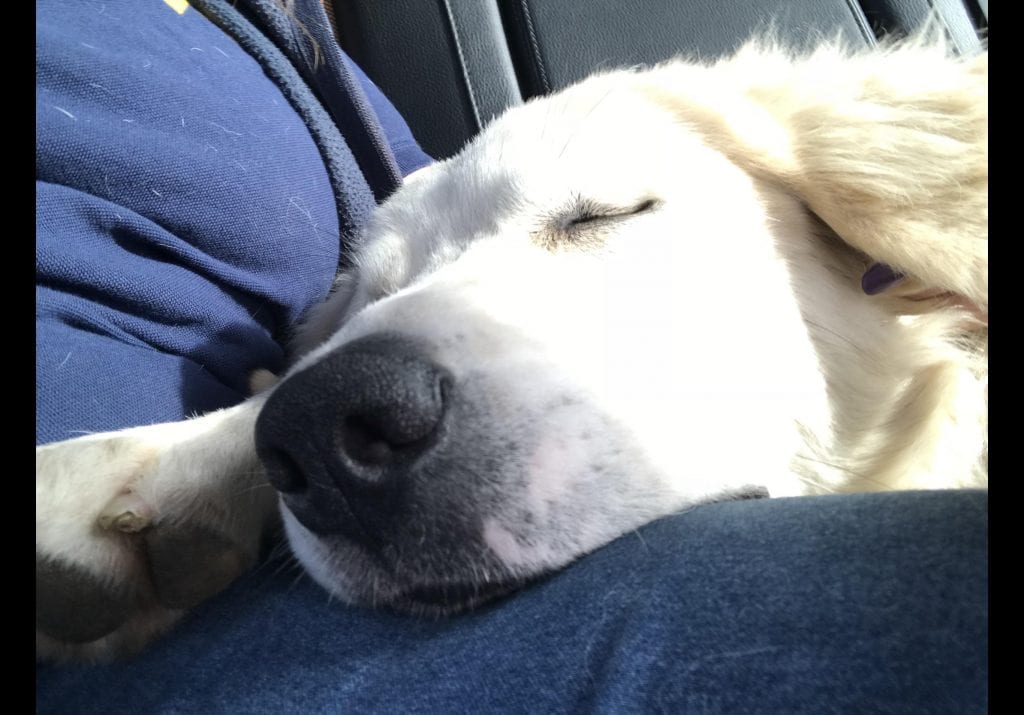 Then it was time for the journey home with our new big lad. He shared the backseat of the car with me, and just as I had dreamt the night before, he spent the whole trip with his big head on my knee….I’m convinced he knew he was safe and loved and would be forever.

So we had collected our fourth rescue dog and now to do the meet and greet with the beagles! Predicament… a text book meet and greet – introduce the dogs individually and calmly on neutral territory. Problem… it was now night time, and Zeus had been travelling for two days, so the introductions took place in our back garden. I have to say it went very smoothly. Ruby, our oldest beagle, is quite used to new dogs arriving and is a superstar at adapting. Bailey, beagle number 2 just didn’t want Zeus to have anything she deemed as hers, which was rather confusing for him. Then he met Cooper, our boy beagle and it turned X rated, Zeus had only recently been neutered, and poor Cooper became the subject of his ardour!! At this point I would like to thank whoever suggested the ‘flaffel’ cloth….ever time Zeus humped Cooper we waved a tea towel around, which got his attention and enabled Cooper to retreat!! 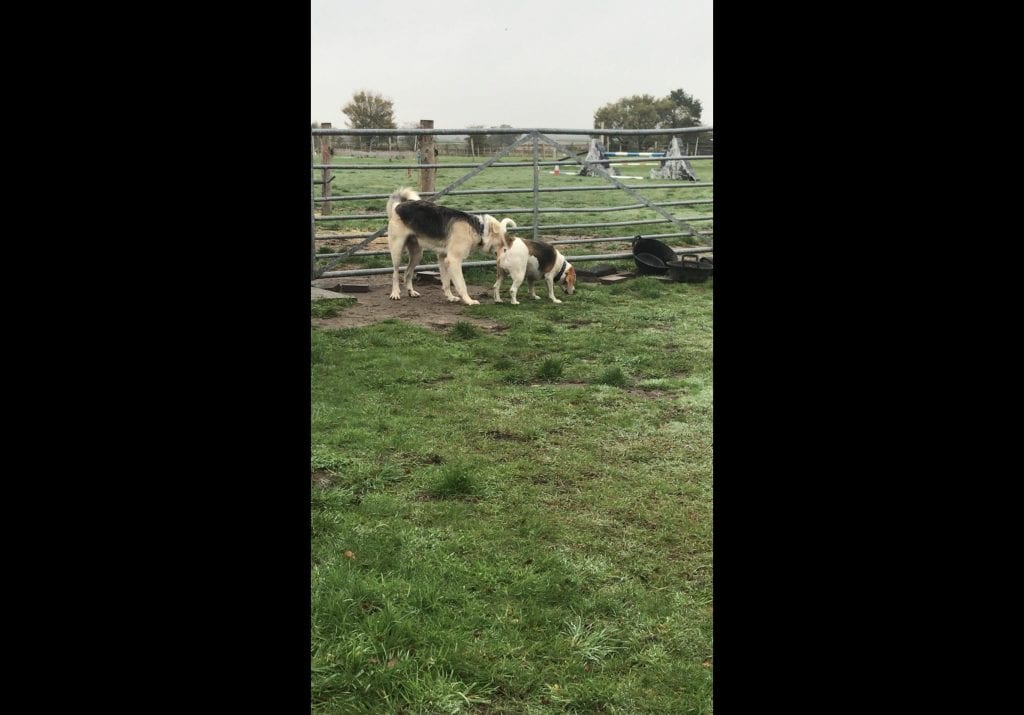 After the initial excitement and Cooper adapting to being the object of desire, they settled, Jayne had suggested getting vet mat as this was what the dogs had been used to sleeping on and this worked really well as Zeus had no idea what the beautiful big soft bed we had bought him was all about!! Well we couldn’t believe it, not a murmur all night….our perfect doggy dream had happened……… or had it??!!

We didn’t follow the first week rules….. Morning one Shaun and beagles went off to do the horses and I stayed behind with Zeus. This massive fluffy lad with blue spray where his man bits had been and the biggest head I’d ever seen, had already stolen my heart. And there we were high fiving our ability and ignoring one of the major first week rules, we continued as normal and had people popping in and out……by the end of day two I was in tears….it was as if I had overdosed my life, and all in it, with E numbers…. what had we done???? The madness culminated in Bailey being taken to the vets after trying to take on and losing to the Romanian street dog!!

Back to square one and we digested everything we had been told by Jayne and Pippa and life became a little calmer. Zeus, we believe, is a Shepard dog descendant and has all the guarding and protective nature to go with it, so we took him to a dog trainer who had a secure field for him to run with other dogs. On the lead he is reactive, this is to say he becomes a barking, pulling beast in a world of red mist. As soon as he was loose with the other dogs on neutral territory, he was as playful as a happy pup. He is still a foaming wolf if someone comes to our gate, but as soon as they are accepted by us they are accepted by Zeus, usually with a paw on each shoulder and kisses!! 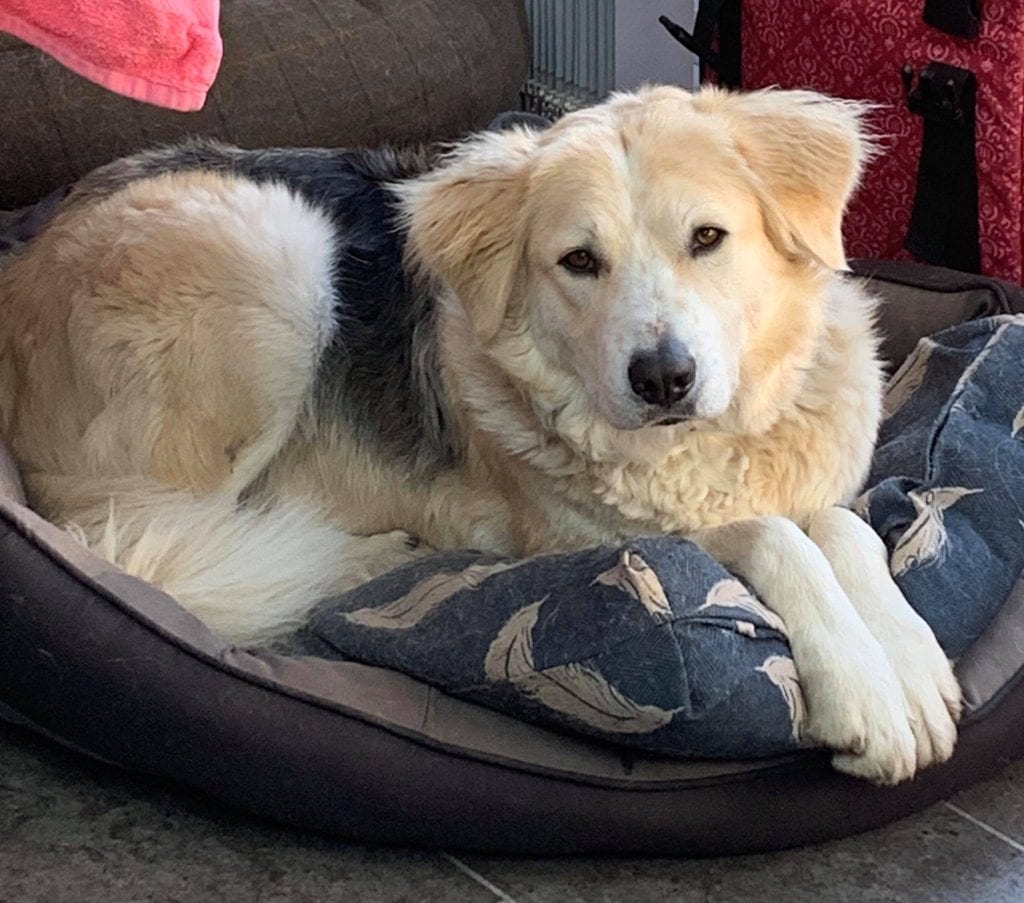 So tears of anguish gave way to tears of love and joy…like the first time he realised no more did he have to lay on the hard floor but the soft bed we had bought him was much nicer…. the first time he decided to become a lapdog and lay on my knee!!! We have made plenty of mistakes along the way, but we love our boy so much my heart hurts, and I like to think he loves us too.

Thank you Jayne and 1 Dog At A Time Rescue