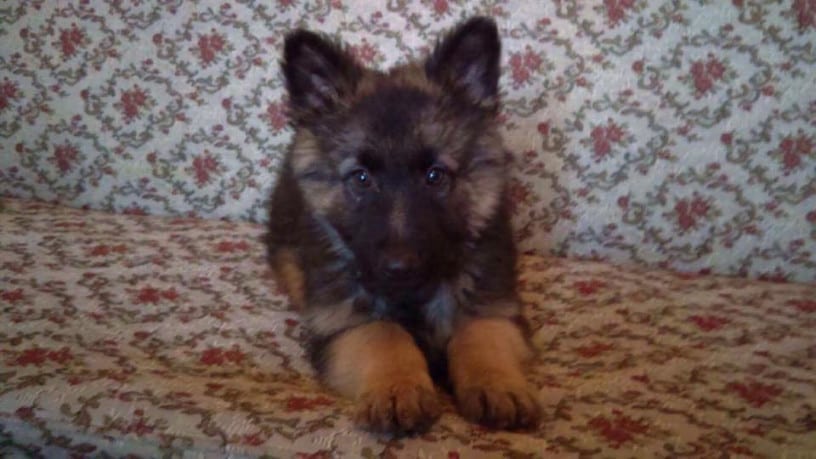 Here at 1 Dog At A Time Rescue UK, we could tell you hundreds of stories about all the Romanian street dogs we have rescued.

Each and every one of our Romanian rescue dogs are miracles in their own right, but if there is such a thing as ‘MiracleOmeter’, then little Meesha’s miraculous story would surely rate as a 10 out of 10.
This three month old German Shepherd puppy was found by our volunteers, Eli and Doina, being used as a ‘football’ by some local boys in a field near Bistrita. Used to seeing unimaginable cruelty towards dogs in Romania, even they were stunned by what they saw as the little puppy cried out as she was kicked from one boy to the next. Our two volunteers didn’t shout or get angry with the perpetrators, and quietly but firmly picked up the little puppy and walked away with her, leaving the teenagers in no doubt that they would not be continuing their ‘game’. 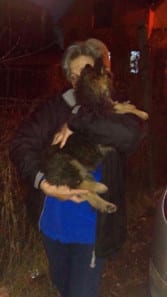 3 month old Meesha being removed from ‘the game of football’

As they walked away, they were told by onlookers that a woman had recently driven up to near where the boys were playing and threw little Meesha out of the car leaving her whimpering by the side of the road. It seemed that this little puppy had managed to survive another close call and had experienced her second miracle of the day.

Relieved that they wouldn’t have to deal with the puppy’s owner and could immediately remove her from danger Eli and Doina took her to the safety of Happy Tails, our shelter in Bistrita Nasaud. On arrival, Meesha was checked over, and there were no outward signs of damage that they could see, but only a visit to the vet would show for sure if there were any broken bones … or worse. A thorough examination by our vet and an X-ray showed that there was no long term damage – just a few cuts and bruises that would heal with time. Surely that rates as miracle number 3! 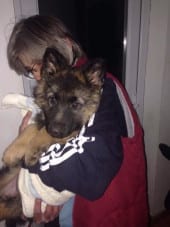 Over the following days, Meesha gradually started to regain her confidence whilst our volunteers continued to monitor her 24/7. When Meesha’s story went up on the 1 Dog Facebook page, it attracted 587 likes and was shared an incredible 407 times, so it isn’t surprising that we managed to find her a home fairly quickly. As experienced Germany Shepherd owners, Vicky and her husband Nick and daughter Megan ticked all the potential adopter boxes and, having lost their last one seven years ago, were desperate to get another one.
“A friend who fosters dogs for various charities including 1 Dog at a Time Rescue sent us a photo of Meesha, and I jumped at the chance to adopt her, and so I filled in the form and waited,” explains Vicky. “It wasn’t long before Jayne, the co-founder of the charity contacted us and arranged for our home check and then suddenly three weeks later, Meesha was on her way to us.”

A big journey for a little Dog 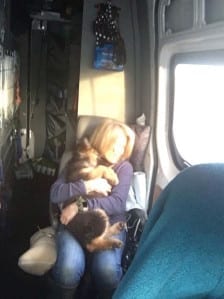 And so on 6th March, 2017 little Meesha began her 1400 mile journey from Romania to her forever home on our brand new Freedom Bus which, rather like Happy Tails, had every conceivable luxury for the dogs.
“We were able to follow the dogs’ journey every step of the way right from when they left Happy Tails, travelling across Europe until they arrived in the UK,” continues Vicky.
Are Meesha and her new family a perfect match? 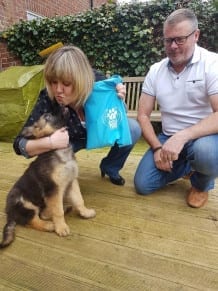 Aside from some initial anger management issues from Dennis, Vicky’s grumpy old cat (her words!), who had rather enjoyed his dog free home over the past few years and didn’t want to play catch in the garden, everything is going wonderfully.

“She’s an absolute sweetheart, not a bad bone in her body,” continues Vicky. “Understandably, given her experiences, she’s a little wary of men, but if they give her time and space and let her come to them, then she’s fine.”

Maybe little Meesha just had the fourth miracle of her short life in finding the most wonderful forever home with Vicky and her family.

If you have what it takes to transform a Romanian dog’s life, then please check out the dogs available on our website and get in touch. As usual, we’re full to bursting at Happy Tails so you won’t just be saving 1 dog, you’ll be freeing up space for other desperate dogs waiting to have their lives transformed.