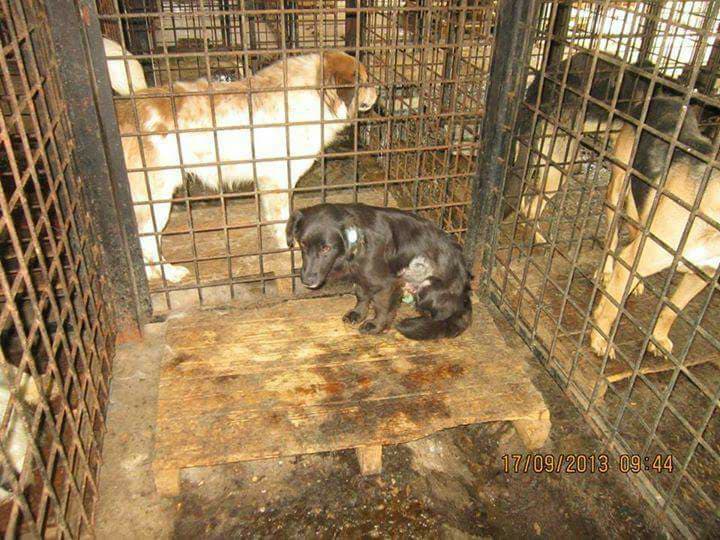 They say never let your heart overrule your head, but thank goodness, we humans sometimes throw caution to the wind and DO WHAT JUST FEELS RIGHT. This is what happened to Maria when she saw poor Mabel, a traumatised, black mongrel dog in a Romanian public shelter. The image of her hunched up, dejected body was so upsetting, so awful that it was impossible not to follow her heart.

“I never intended to get another dog,” says Maria. “I already had Fizz, my wonderful black Labrador and the love of my life, but I couldn’t get Mabel’s image out of my mind. Not helped, no doubt, by having so much time on my hands. I had been very poorly, first with a broken leg and then a blood clot formed that went to my lungs. They said I was lucky to survive. Could I really manage with another dog?”
But Mabel’s sad little face and her appalling condition continued to haunt Maria. The vets in the public shelter had done what they often do; poor Mabel was spayed, and her puppies aborted at full term. She was then sewn up and put back with a weeping wound, into the dirt, filth and squalor of the public shelter. It’s a miracle that she survived. Many don’t.
And so, Maria got in touch with 1 Dog at a Time Rescue, and Mabel’s life might just start to take a turn for the better. This was four years ago before we at 1 Dog at a Time had our own rescue centre ‘Happy Tails’ and so, with the promise of a home to go to, Mabel was removed from the PS and taken to another shelter until she could come to the UK. 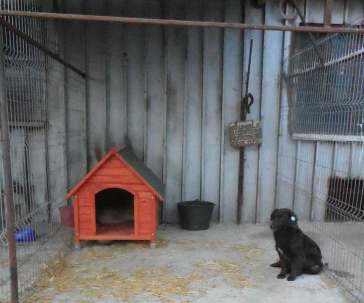 Mabel waiting to have her life transformed

Meanwhile, Maria, due to her own ill health, was still off work from her job as a social worker and forced to spend far too much time either in bed or on the sofa. It was therefore up to our wonderful volunteers to collect Mabel on her arrival in the UK and drive her to Wales to her new home.

17 October 2013 was the date of Mabel’s much-anticipated arrival. However, there was no joyful meeting with Maria and Fizz. Of course, they were excited to meet Mabel but, Mabel, on the other hand, was absolutely traumatised and darted under the stairs to her awaiting crate and REFUSED TO COME OUT. This wasn’t how Maria had dreamed it would be. She so wanted to help her and make her life better, but what could she do?
“Mabel only came out of the crate when I had gone to bed,” continued Maria. “I could hear her moving around downstairs during the night, but in the morning, she’d be back in the crate. She didn’t even seem to notice Fizz and me and was in a sort of daze.” 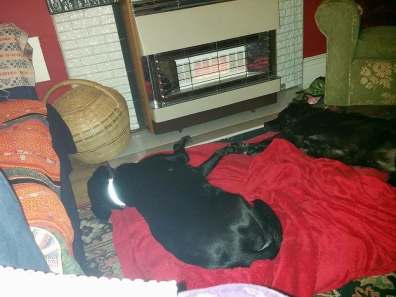 The Long, Slow Road to Recovery

Perhaps because of her job, where no doubt Maria has dealt with her fair share of troubled souls, she knew that only patience, time and kindness would help Mabel to heal. Mabel clearly hadn’t lived in a home before, wasn’t house trained and even had to learn to have a collar and lead on. But they both had a lot to learn.
“I made a few classic mistakes when Mabel arrived,” says Maria. “I put her out in the garden one evening just before a big storm and Mabel, in absolute terror, scaled the garden wall and ran off. This was one of a couple of occasions when I spent hours wandering alone in the dark trying to find her, but thankfully eventually she always came back.”

Over the coming months, little by little Mabel started to come out of her traumatised shell. There were no dramatic improvements, and it was more a case of lots of small steps forward; Fizz and Mabel’s paws touching as they slept in front of the fire and her allowing Maria to stroke her, albeit with her feet. Then there would be even more steps backwards, when a sudden movement or a broom falling on the ground would have Mabel back cowering in the corner. Just touching the top of her head was absolutely terrifying for her as if she was expecting someone to grab her by the throat. 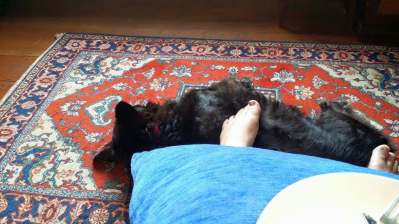 For the first time, Mabel allowing Maria to stroke her – albeit with her feet!

It’s taken a long time, but today, Mabel is transformed from the terrified little scrap of a thing who arrived too traumatised to come out of from under the stairs. 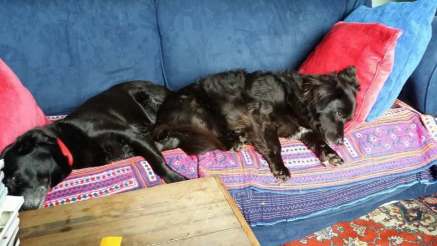 Mabel and Fizz with Amelia, Maria’s niece who they absolutely adore
Mabel now has a new best friend, Barny as Fizz sadly died a few years ago. Whereas Fizz used to be ‘top dog’ Mabel has now come out of herself and is a transformed character. No more hiding under the stairs for Mabel. Her life with Maria and Barney is tremendous, and she’s living every wonderful minute to the full. 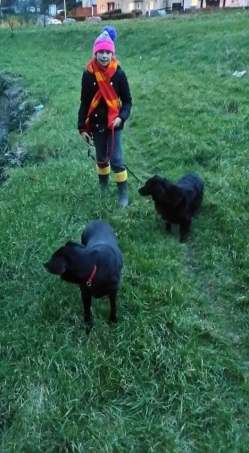 Mabel now has a new best friend, Barny as Fizz sadly died a few years ago. Whereas Fizz used to be ‘top dog’ Mabel has now come out of herself and is a transformed character. No more hiding under the stairs for Mabel. Her life with Maria and Barney is great and she’s living every wonderful minute to the full. 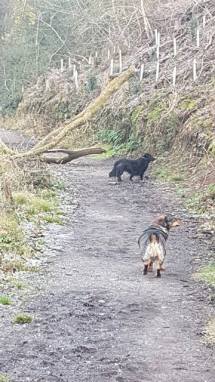 “It’s been a long, slow road to recovery,” says Maria, “but despite everything we’ve been through I wouldn’t be without Mabel. Everyone who meets her loves her. She is playful, ‘cwtchy’, (a Welsh term meaning affectionate and loving) and has made my little family complete.”

” Knowing what she has been through, I get an enormous amount of pleasure seeing her running, being joyful, happy and playing. It really is worth more than all the money in the world. I never regretted taking her on; she’s only added to my life. If you’re thinking about getting a Romanian dog. Just do it. There will, of course, be challenges, but Mabel is such a delight to have in my life.” 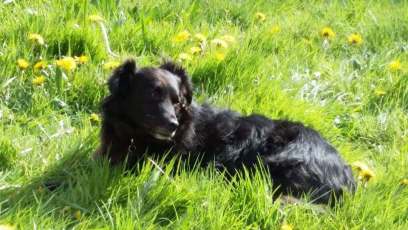 Maria’s favourite photo of Mabel, contented and happy in her new life.

If you have what it takes to transform a Romanian dog’s life, then please check out the dogs available on our website and get in touch. As usual, we’re full to bursting at Happy Tails so you won’t just be saving one dog, you’ll be freeing up space for other desperate dogs waiting to have their lives transformed.